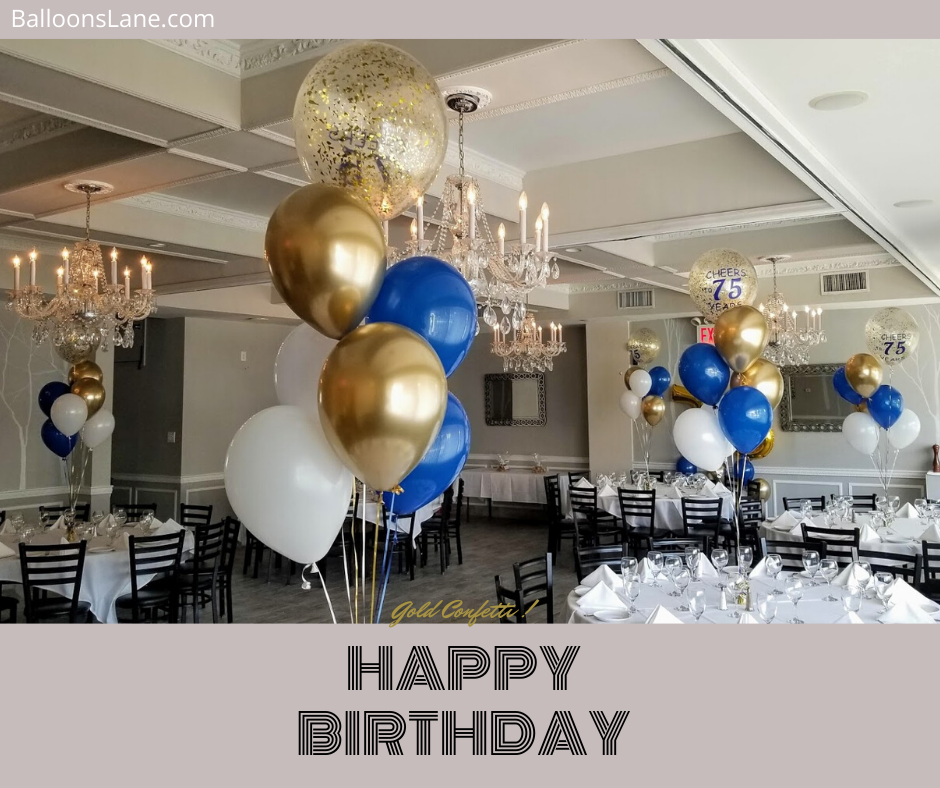 Birthday confetti balloons in Gold Silver and black, We deliver in Brooklyn, NYC, and Staten Island

Balloons are a life of all parties, aren’t they? They bring more color, charm, and liveliness to parties and celebrations making them much more enjoyable. To add more fun and appeal to decor, there is a particular type of balloons, which is a huge success when it comes to parties. What better way to add magic to a celebration than to have magical confetti fall down from above your heads? Surely, there is no better way! This calls for some lovely fun confetti balloons in Brooklyn, NYC, and Staten Island.
Confetti balloons come in different sizes and shapes with different kinds of confetti filling in them. There are so many ways to make balloons more stylish and attractive, but putting confetti in them is so far the best way. Confetti makes balloons stand out more and you can give your personal touch to parties by choosing confetti balloons that reflect your personality the most. There are so many types of confetti, which you can go for. There are small balls of confetti as well as impressively shaped stuff that you can put into balloons. From gold circular confetti to silver starred confetti, you can choose anything for your confetti balloons.
If you want something more magical than confetti balloons in NYC, Brooklyn, Staten Island then you can go for tulle balloons. They have nice and lovely tulle covering the balloons which can be modified in any way to go with your party’s theme. You can try anything from fairy themed parties where you can have white balloons covered in lighter colored tulle fabric to disco themed ones where you can play with brighter shades of tulle. Tulle can have long loose fabric at the knot which falls down in a lovely cascading manner. These types of balloons are great as they are designed according to the height of the ceiling. The greater the height of the ceiling, the longer the tulle tail can be! You can even have flowers tied at the knot or something which reminds you why you are having this celebration.
Another cool party ballons option is a glitter balloon which has the funkiest form of confetti filling in them. The magical glitter adds more sparkle, appeal and party vibes to your celebrations. They not only stand out more from the general décor but also bring more liveliness and style to it. They help you show people the kind of electric and energetic soul that you have and set the mood for the kind of party that you have. Birthday bashes, particularly, are incomplete without some sparkly glitter balloons which you can later on pop and have an after-party in its truest form.
Metallic balloons and chrome balloons are also fun and attractive. They have this cool energy about them which transmits into the people in a party, makes them livelier, and uplifts the fun element by many levels. You can have them in many shades that you love and match them with the theme of the party. If you search for balloons near me, Balloons Lane will surely make your celebrations more fun.
So, confetti balloons are a nice option for your celebrations as they not only look more beautiful but also help you have a more impressive and stylish décor!

We use High-Quality balloons from Pioneer Balloon, Gemar Balloons

drop us a line and keep in touch

Made with ❤ by Balloons Lane